Zetor presents its current and future machines at the Techagro Trade Fair, commemorates the 70th anniversary of its brand

Brno, 4 April 2016 - The Zetor brand is presenting at the ongoing Techagro Trade Fair in Brno not only its current product portfolio, but its future machines as well. At Zetor’s stand, visitors can view the modernised Forterra model series, the Zetor Prototype 50 and the new Major or the Zetor by Pininfarina design concept. At the trade fair, the Zetor brand is also commemorating its 70th anniversary. 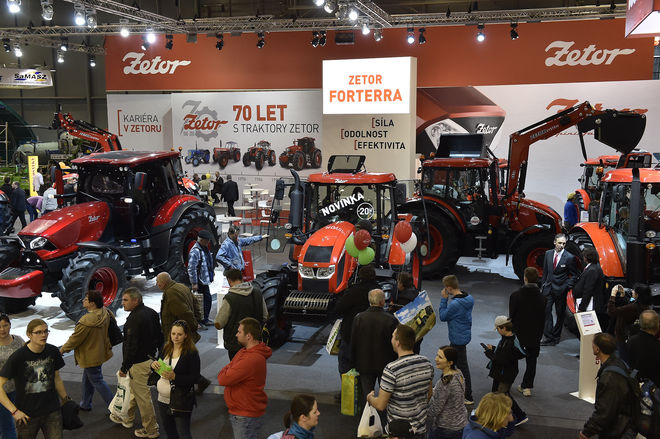 “Zetor Tractors a.s. is proud of the history of its brand. The past is an inspiration for us and contributes to our commitment, but we are also looking towards the future and new goals and challenges.  This is why we have planned this year’s presentation of the brand at the Techagro Trade Fair in an unconventional manner. Besides the current products we are also showing visitors to the trade fair the materialised future of Zetor tractors,” concludes Margaréta Víghová, Director of the Corporate Communication Division at Zetor Tractors a.s.

The most significant new feature that Zetor Tractors a.s. is presenting at Techagro is the modernisation of the Forterra model series. The Forterra product has received the new label Forterra CL, followed by the already implemented labels Forterra HSX and Forterra HD. The name of the model series is unchanged. “The aim is to make it easier for customers to become familiarised with individual products. Using the same name for the model series and the product confused customers. The CL label is an abbreviation of the word classic. HSX labels the machine equipped with a power shuttle, and HD refers to heavy duty, which means a robust machine with a larger wheelbase and with a sophisticated solution,” says Adam Žert, Director of the Sales and Marketing Division, describing the reasons for adjusting the name of the machine.

Modernisation of the Forterra model series does not apply only to modification of the product name. The biggest innovation of Forterra is an engine that fulfils the strictest emission standard State IV. In order to achieve this fulfilment, Zetor uses a combination of active DPF filter technology (durable particle filter) and the SCR system (selective catalytic reduction). The entire Stage IV emission solution brings benefits to customers in the form of optimisation of torque, and compared to competitors’ offerings the Zetor Stage IV solution is equipped with fewer electronic elements, and last, but not least, Stage IV helps customers save on fuel, which has been verified by an independent test conducted by Mendel University in Brno.

“One of the pillars of the Zetor brand is effectiveness. The modernised Forterra products offer customers fuel savings and a fuel tank with 20% larger capacity. Therefore, the end user can work with the machine up to 40% longer than has been possible until now,” adds Adam Žert.

During modernisation, an emphasis has also been placed on ergonomics and user comfort. The new Forterra CL offers more advantageous placement of the reverse lever (on the left side below the steering wheel), and for all Forterra models automatic PowerShift is used and work lighting is expanded, which has led to optimisation of the light areas during work in the dark, and more seat variants are also available. Forterra has boosted HD and handles the new increased trailer weight of up to 31 tonnes, while the version used until now could handle only up to 22 tonnes. The production of the Forterra model series will be launched in approximately the middle of this year.

Enlargement of model and product series and design future

The future of the Zetor brand is aimed at expanding from the current four to six model series. At Techagro, visitors have the opportunity to view the prototype of a three-cylinder Zetor tractor with 49 horse power, which in the future will become the basis of the fifth and smallest model series of Zetor tractors. “The tractor will use a mechanical transmission with fully synchronised gear shifting with eight forward speeds and eight in reverse and a maximum speed of 30 kph,” Adam Žert explains.

The new three-cylinder tractors will find uses in particular on small farms and among hobby farmers. The new tractor, which will bear the work label Zetor Prototype 50, will be offered in four designs – as a four wheeler, convertible or with a cabin, or a two wheeler, with or without a cabin. The start of the production of the new machine is planned for the first half of 2017. Along with this new product line, Zetor is also expanding its Zetor System offering to include new front loaders designed for these types of tractors.

The prototype of the new Major can be seen at the Techagro Trade Fair as well. Zetor Tractors a.s. plans to introduce onto the market two new machines belonging to the Major model series.  They will offer farmers four-cylinder engines with 75 horse power and transmissions that differ from those in current products. The new tractors will have available a transmission with 12 transmission gears in front and 12 in reverse or a transmission with 24 speeds in front and 12 in reverse, which will be operated via a two-stage torque multiplier (PowerShift) and a hydraulic reverser (PowerShuttle). The machines will be able to achieve a speed of up to 40 kph. “The cabin interior has undergone a number of changes and features a new integrated steering column. Emphasis has been placed on the ergonomics of control, and so the user will feel more comfortable in the cabin. We plan to start series production of new Major models at the end of this year,” says Adam Žert.

Last, but not least, the design concept Zetor by Pininfarina is being presented at the Techagro Trade Fair, which is a unique study whose novel form in the future will be succeeded by individual model series of Zetor tractors. The company's aim is to present a product with an applied design during the first half of next year. Zetor by Pininfarina experienced its global premiere at the autumn Agritechnica Trade Fair in Hanover, where it attracted great interest from the international professional community as well as from members of the general public. The media described it as “the sexiest tractor” and the “Ferrari tractor” or the “most sporty tractor”. Information about the design concept can be found at the website http://www.zetorbypininfarina.com/. 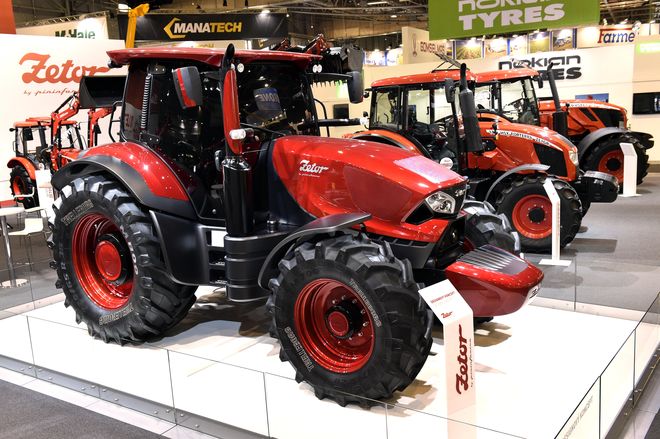 The Zetor brand at the present time

The current product portfolio of Zetor is represented at the Techagro Trade Fair by all currently available model series, which are Major, Proxima, Forterra and last year’s new Crystal series. Crystal with its a six-cylinder engine with an output of 144 and 163 horse power is the most powerful tractor in the Zetor portfolio so far. A sales campaign for Crystal is currently under way at the trade fair, where customers can obtain the Crystal 150 model with a CZK 70,000 discount.

This year is the year of the 70th anniversary of the Zetor brand. Not only visitors to the trade fair will have the opportunity to mark this anniversary in a dignified way. On 3 April, a contest was launched on a new website (http://www.zetor70.cz) to select the most interesting personal story involving Zetor. Until 15 June anyone can contribute photos with a Zetor tractor, answer a few simple questions and have a chance to win one of several attractive prizes. For the Techagro Trade Fair, Zetor Tractors a.s. is planning a series of special events for customers, employees and business partners as a run-up to the Month with Zetor campaign, which will take place in May. The events to commemorate the 70th anniversary will continue for the rest of this year as well. Those interested in learning about the rich history of the brand can find out more by visiting the website http://www.zetor70.com/.