For the 45th time, the ZETOR brand participates in the international exhibition “Země živitelka”. From August 23 to 25, at the Exhibition Grounds in České Budějovice, visitors can see all six model ranges of ZETOR tractors. The biggest attraction is, however, the world premiere of the innovated ZETOR CRYSTAL HD. The renowned tractor celebrates its 50th birthday this year.

Just like every year, this summer, ZETOR TRACTORS a.s. Company presents its products at the popular farming show “Země živitelka”. The visitors of the exhibition grounds in České Budějovice can see the red colour typical of the elegantly shaped tractors. On display are tractors of all six model ranges: UTILIX, HORTUS, MAJOR in the new design, PROXIMA, and FORTERRA. One of the most expected moments at the ZETOR booth is the presentation of the innovated CRYSTAL range in HD version with the maximum power of 171 hp. Customers all over the world can order this new tractor from August 23. “2018 in ZETOR is the year of innovating models and launching innovations. Since spring, we have been offering tractor with the power of 40-70 hp: UTILIX and HORTUS. In July, mass production of MAJOR in the new design was started. During the year, innovated tractors of the PROXIMA and FORTERRA ranges were launched; they were innovated mainly in the area of safety such as braking systems etc. But the climax was planned for autumn when we were planning to launch new ZETOR CRYSTAL HD. I am happy that we can present the tractor both to professionals and the public in domestic market, at “Země živitelka” show. I am convinced that the most powerful tractor in the portfolio will find its way to the customers and will continue in its successful 50-year-long tradition,” says Marián Lipovský, Managing Director, ZETOR TRACTORS a.s. The innovated CRYSTAL employs the well-established 6-cylinder Deutz engine with displacement of 6.1 litres and maximum power of 171 hp thus being the most powerful tractor in the portfolio of the ZETOR brand. The engine meets STAGE IV emission standard while the Common Rail system guarantees low production of emissions. The engine is popular for its long durability and low consumption.

Just like the innovated FORTERRA, CRYSTAL also uses the in-house produced ZETOR ECO 40 transmission with the range of 30/30 gears. It has five-stage reverser transmission with automatic three-stage PowerShift multiplier and electro-hydraulic PowerShuttle reverser which allows the operator to change the direction of travel without the necessity to depress the clutch pedal and shift gears. At the maximum speed of 40 kph, the transmission works in economical 1,750 rpm thus saving operation costs mostly while travelling. In the most frequent range of 4-12 kph, it offers 13 gears. Two auxiliary cylinders provide balanced load of the three-point hitch and the maximum lifting capacity of 8.5 tonnes. CRYSTAL has four-section additional distributor with electronic control, so-called FINGERTIP; it allows the operator to regulate the period and amount of supplied oil. Furthermore, the distributor is equipped with a big reverse ¾ quick coupler for the drain of rotary hydro-motor. A common feature is HER Hitchtronic, the effective system of managing ploughing – automatic regulation of the rear three-point hitch which saves about 5-7 % of fuel.

The spacious cabin of the tractor has 6 pillars, suspension and low noise. It is located by 10 cm higher which improves the view from the cabin. Work of the operator will be much more comfortable mainly due to a multifunctional panel with controls inside the cabin, Bowden shifting, comfortable swivel seat with pneumatic suspension, new dashboard, panoramic rear-view mirrors and a roof window which can be used for ventilation of the cabin and offers a better view of the objects while working with front loader. The tractor can also be equipped with eight LED lights which illuminate the working area around the tractor. Air-conditioning and radio is common equipment. In respect of safety, both the operator and passenger seats are equipped with a safety belt; moreover, the operator’s seat is also equipped with a sensor that disconnects PTO in the moment when the operator leaves the seat. In case of need, PTO can be again switched on using the external controls on the rear fender. CRYSTAL HD uses front axle suspension. It is composed of two separate independently suspended semi-axles and equipped with 100% controlled differential lock. Thus, the operator gets high comfort of operation under nay condition. As an option, it can be also equipped with central axle greasing.

The tractor is equipped with more sophisticated braking system. Rear brakes have pneumatic control, while front axle brakes have hydraulic control. This results in higher safety of the tractor in respect of braking.

The volume of fuel tank is 300 l; the tractor also has 23-litre urea tank. The maximum speed is 40 kph, the length is 5.4 m, width 2.5 m and height slightly over 3 m. It is a robust tractor which will be offered on the marked in two versions: ZETOR CRYSTAL HD 150 and ZETOR CRYSTAL HD 170. Once launched, CRYSTAL HD becomes the new flagship of the ZETOR brand. This year, ZETOR CRYSTAL celebrates 50 years from its first launch. The tractor, introduced in 1968, brought positive acknowledgement for the whole brand shortly after its introduction. The first safety cab with suspension in the world and 4-cylinder (and since 1975 also 6-cylinder) engine equipped with a balance rod made the tractor the first one in the world where the noise in cabin did not exceed 85 dB. Together with a unique and revolutionary design, CRYSTAL was a first-class tractor in global scope at that time. ZETOR tractors were produced in the Company in Brno until 1981. Then, for political reasons, production was moved to ZTS Martin, Slovakia. The tractors from Martin were marked ZTS and they were produced for another 20 years including three innovations. Production of the new generation of ZETOR CRYSTAL started in Brno in 2015. “Země živitelka” is an international farming show which presents farming machinery and modern trends in farming. The Exhibition Grounds in České Budějovice hosts more than 500 exhibitors from 20 countries of the world. The show is visited by about 100,000 people. This year of the show is entitled “100 years of Czech farming”. And it was just 100 years ago that Brno Arms Factory originated; the factory was also the creator of the ZETOR brand in 1946. ZETOR has been participating in “Země Živitelka” from its very first year, without any absence, up to now. 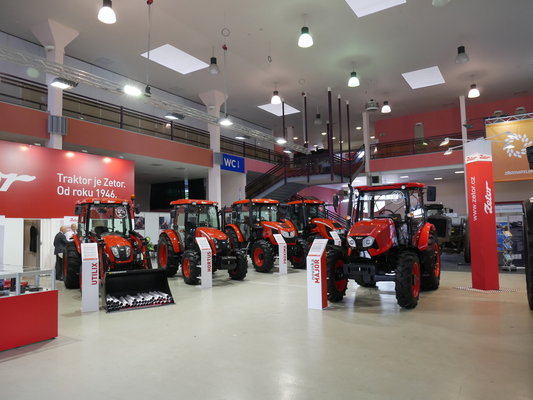 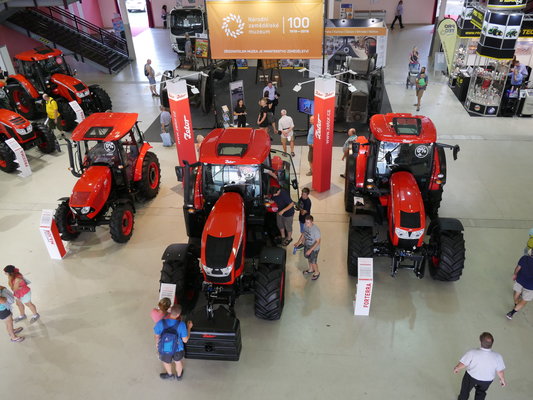 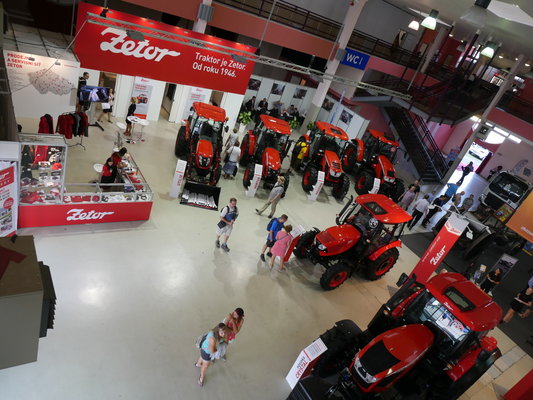 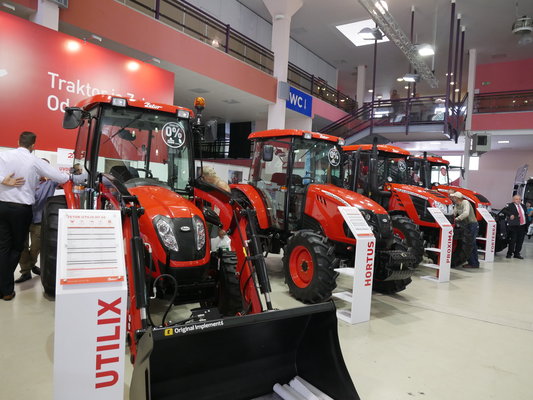 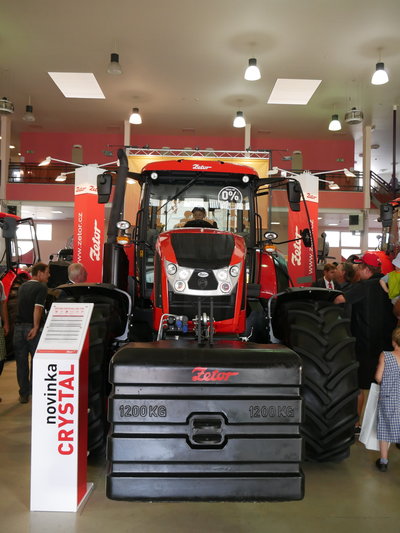 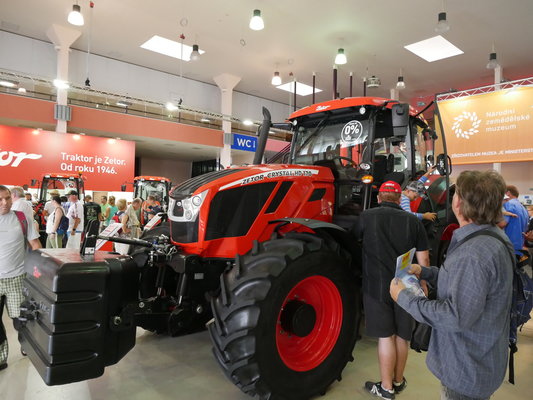 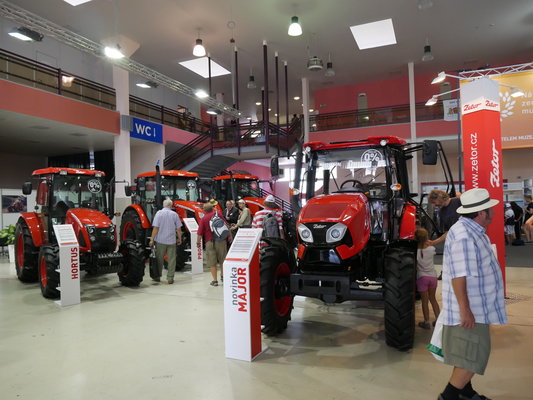