Hannover, Brno, 20 November 2015 - The ZETOR brand met with success at the Agritechnica fair held in Hannover. The introduction of the Zetor Pininfarina design concept was one of the great crowd-pullers at the fair and the Czech brand was reported on by global media including the BBC and Daily Mail. 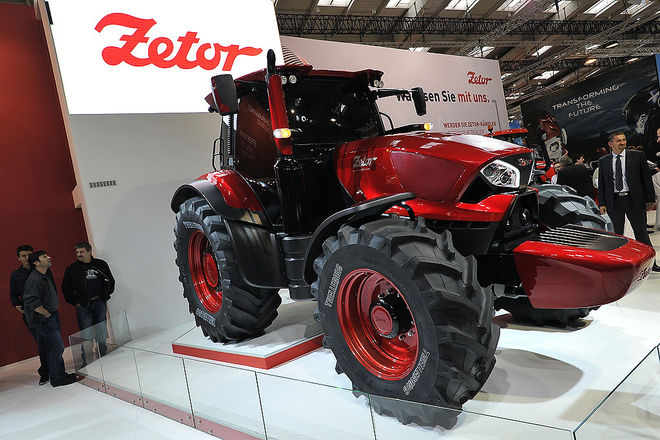 ZETOR TRACTORS a.s. introduced the future direction of the brand at Agritechnica, the objective of which is to expand the current model series from four to a total of six, thus achieving a performance range from 50 to 200 hp. Visitors to the Hannover fair had a chance to see a 49 hp three-cylinder tractor that will become the keystone of the fifth model series and the ZETOR CRYSTAL, the most powerful tractor of the company portfolio, which was launched into the market in June of this year. ZETOR TRACTORS a.s. additionally announced expansion of the MAJOR series with two further products which will offer, among others, greater transmission options to customers.

The biggest attention from not only the fair visitors, but the majority of foreign journalists, was aroused by the new ZETOR Pininfarina design concept, created in cooperation with the famous design studio. This newly introduced design direction has been described by the media as the “sexiest tractor”, a “Ferrari tractor” or the “sportiest tractor in the world”.

ZETOR also used the fair environment to seek out new dealers and business partners with the aim to strengthen market position in Western Europe. The company focuses on Germany, France, the United Kingdom, Benelux and others. The ZETOR stand was visited by tens of thousands of visitors during the fair. We recorded interest in establishing cooperation with tens of business partners and dealers, and with this step, we aim to strengthen our position in foreign markets.

The new design concept by the Pininfarina studio moves ZETOR towards a deeper emotional experience full of sensuality, dynamism and modernity. The Zetor by Pininfarina concept is to embody the perfect combination of power, dynamics and emotion, while preserving the usefulness and practicality of the industrial machines that tractors certainly are. Zetor by Pininfarina consolidates individual elements into a modular design that can be transferred to the ZETOR tractor series. The objective is to apply the design concept to all series, not only to the current range, but also in the future.

“We are very proud of the positive feedback that the introduction of Zetor by Pininfarina triggered not only at the Agritechnica fair, but also in the world media. The recorded response is for us confirmation that we are headed in the right direction. It is important to note that the presented strategy of product portfolio expansion arises from customer requirements. This is an ideal opportunity to establish cooperation with new business partners,” says Margaréta Víghová, Director of Corporate Communications at ZETOR TRACTORS a.s.

The ZETOR brand reaped further success at Agritechnica thanks to its latest model ZETOR CRYSTAL. It was one of three machines nominated for the Machine des Jahres 2016 finals in the mid-sized category, the results of which are decided by specialised journalists directly at the fair. ZETOR CRYSTAL has also received great acclaim in other global fairs, including Ireland, Moldavia and at the “Země živitelka” agricultural fair in the Czech Republic.

“We appreciate the awards received by our latest machine. We were pleasantly surprised by our current success at the Machine des Jahres 2016 contest at Agritechnica. Our nomination to the final trio is a matter of prestige. ZETOR CRYSTAL is a powerful, durable and efficient tractor, the great advantage of which is its easy control,” says Adam Žert, Director of Sales and Marketing at ZETOR TRACTORS a. s.

ZETOR TRACTORS a.s. also introduced the keystone of its new model series at Agritechnica. It is a tractor with a 49 hp three-cylinder engine. The tractor will use a mechanical gearbox with a fully synchronised transmission system, with eight forward and eight reverse speed gears and a maximum speed of 30 km/h. The new three-cylinder tractors will be particularly suitable for small farms and hobby farmers. ZETOR TRACTORS a.s. further announced expansion of the MAJOR model series with two new products. They will offer customers 75.3 hp four-cylinder engines and multiple transmission options. The machines will either have a transmission with 12 forward speed gears and 12 reverse speed gears, or a transmission with 24 forward speed gears and 12 reverse speed gears that will be controlled by a two-step PowerShift torque multiplier and hydraulic reverse power shuttle. The tractors will reach speeds of 40 km/h. The redesign of cabin control elements has also been advised.