The ZETOR TRACTOR SHOW has arrived at the finish, reaffirming its success as an event

Brno, 23 February 2016 – the fifth anniversary season of the ZETOR TRACTOR SHOW has arrived at the finish. 13 European countries, 69 stops and more than 15,000 visitors – that was this year's ZETOR TRACTOR SHOW. The unique product exhibition format for the ZETOR portfolio thus again proved successful. Both the general public and experts could test their tractor-handling skills directly in the fields and further had an opportunity to participate in a contest for attractive prizes. The main prize was a trip to the Czech Republic, including an excursion to the manufacturing plant of ZETOR TRACTORS, a.s. and a visit in the ZETOR GALLERY. The winner of the prize is an Irish farmer. 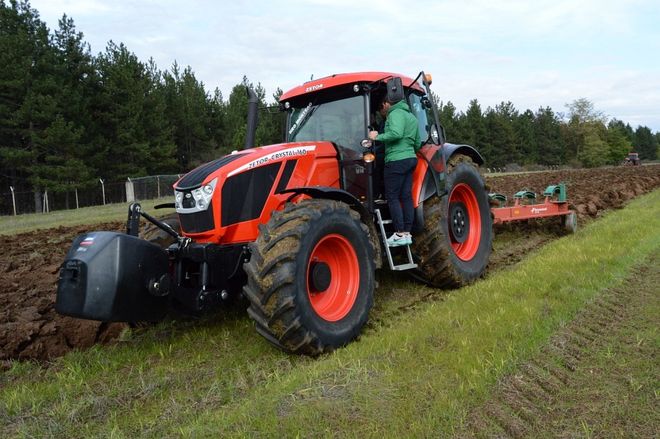 The ZETOR TRACTOR SHOW launched in April last year. The “ZETOR” promo truck together with aptly named “FUN VAN” travelled a total of 25,699 kilometres during a campaign that lasted eight months. The first stop was Ireland, after which the show travelled through 12 other European countries. The show also travelled to Switzerland and Norway for the first time. More than 15,000 spectators gathered at 69 stops of the ZETOR TRACTOR SHOW convoy.

“The ZETOR TRACTOR SHOW is a unique event allowing us to not only present the ZETOR brand and our new products to the wider public, but also to allow current and potential customers to familiarise themselves with the characteristics and quality of our machines. We are in personal contact with the participants of the event, we obtain direct feedback from them and we can react to it immediately,” commented Adam Žert, the Sales & Marketing Department Manager, about the event.

So, what could visitors see during the show in 2015? First of all, they were able to see our newly introduced ZETOR CRYSTAL, the most powerful six-cylinder tractor in the company's portfolio thus far. Furthermore, the FORTERRA HD was introduced to the audience, and the ZETOR MAJOR and ZETOR PROXIMA model lines, which are greatly admired by our customers, were also part of the show. A demonstration of the tractors directly in the fields involving the possibility of testing the machines and aggregations properly under operation was possible at the majority of stops that the show visited. Part of the event included an accompanying programme dedicated to the extensive history of the brand. Thus, the classic ZETOR 25 also travelled together with the latest models in the show.

The pan-European roadshow further offered a competition for attractive prizes. The main prize was two flight tickets to the Czech Republic encompassing an excursion of the production plant and a visit to the ZETOR GALLERY. Every visitor of the ZETOR TRACTOR SHOW could take part in the contest. The rules were simple. A correct answer to the question "How many kilometres will the promo truck truck travel during the course of this year's entire ZETOR TRACTOR SHOW?" The prize went to Irish farmer Pat Carroll, whose estimate of 25,500 kilometres was closest to the actual total kilometre amount. The ten next closest guesses won a tablet. Other contestants received promotional items. In addition to the main prize, visitors at each individual stop could also take part in a contest, which saw winners from each country receive a new tablet. In total, ZETOR distributed tens of tablets and hundreds of valuable prizes. We congratulate all the winners!

“I had not believed that I would be the winner. I am surprised and very pleased at the same time. I am looking forward to visiting the plant and to seeing the production of ZETOR tractors and the ZETOR GALLERY,” Pat Carroll commented the moment when he learned that he had won a trip to the ZETOR plant and to the Czech Republic.

The jubilee year of the show is already behind us, but ZETOR never sleeps and is already preparing for the coming roadshow. This year, the event's setup shall commemorate the 70th anniversary of the ZETOR brand. The aim is to actively attract visitors to engage in the programme and in the ongoing celebration of the brand's anniversary. The ZETOR TRACTOR SHOW launches in the Czech Republic in May.

“The modification of the format of the ZETOR TRACTOR SHOW is based on the wishes expressed by customers. Besides testing the tractors, they also enjoy the fun and appreciate the accompanying programme and contests. We have listened to these desires and our goal this year is not to break the ZETOR TRACTOR SHOW into several stops in one country, but to organise an event which will be richer in terms of the programme, while at the same time preserving the main idea, i.e. the possibility to test our products. Currently, we are negotiating the dates and locations of individual stops,” Adam Žert, the Sales&Marketing Department Manager, adds.

The history of the ZETOR TRACTOR SHOW started in 2011 as part of commemorating the 65th anniversary of the ZETOR brand. The purpose of this event was and is to allow customers and fans to become better acquainted with new products and to allow them to properly test ZETOR tractors under operation. Thanks to direct customer contact, the brand receives the immediate feedback and reactions that are so important for setting the course of the brand's future development. Our company's primary focus is on the customer. As part of the entertaining programme, a whole range of accompanying activities will be organised. During the entire course of its history, the ZETOR TRACTORS SHOW has visited 20 European countries, stopped at 312 locations, and has been attended by more than 51,000 people.