Inspired by nature, meant for fantasy. These are calendars for 2017

ZETOR TRACTORS a.s. Company launches new edition of calendars for 2017. First of them depicts a selection of our red tractors throughout the portfolio; the other one, which is a limited edition, presents 12 unfinished stories playing on the viewer fantasy. The calendars will be on sale from October 20.

“We cannot wait for the public to see the new limited edition of ZETOR calendars which expresses the major aspects of our brand in a very original way. We believe that this year’s innovative version of the calendars attract ZETOR fans and that it will be at least as successful as last year when we were awarded a judges’ prize for photo-production in the Fénix Content Marketing Competition,” says Margaréta Víghová, Corporate Communications Director of ZETOR TRACTORS a.s. 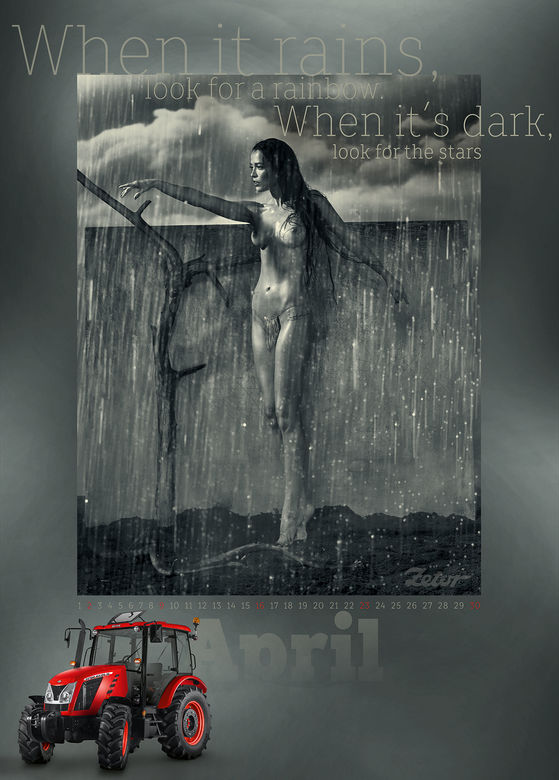 The limited edition of ZETOR calendars for 2017 presents the calendar as a work of art; original photographs leave space for fantasy. Each page in the calendar tells a unique story where the main part is not played by ZETOR tractors, though. The main theme of each month is a lyric image of nature, their changes during seasons and human activities typical of the given season.

The calendar was created in cooperation with Martin Fridner, a Slovak photographer, who was preparing the limited edition last year as well. He worked on the concept of the new edition since the beginning of the year. The photo shoot with the models took four days. If compared with last year, this year’s photos were only little edited in postproduction. The faces of this year’s limited edition are Lucia Javorčeková, Silvia Križanová, Andrea Prouzová and Alžběta Šugárová. The product edition presents the models together with all ZETOR model ranges. 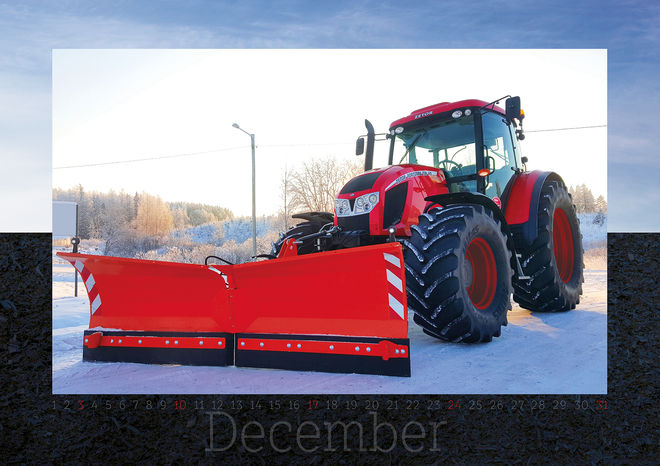 “The previous edition of the calendar was based on complicated photo-realistic montages, which was a very demanding process related both to time and postproduction. This year, most of the time was devoted to preparation and photo shooting. Everything you can see in the final photos is reality which looked just the same during shooting; no special effects were added later,” says Martin Fridner, the creator of the new ZETOR calendar.

ZETOR calendar limited edition for 2017 will be on sale from October 24 in a limited number of 1,000 pieces. The price of the product calendar with red tractors is CZK 189. The limited edition with art photographs costs CZK 699. Both calendars will be available within ZETOR business network. In the Czech Republic, you can buy the calendars on http://eshop.zetor.cz; outside the Czech Republic visit any authorized ZETOR dealer. 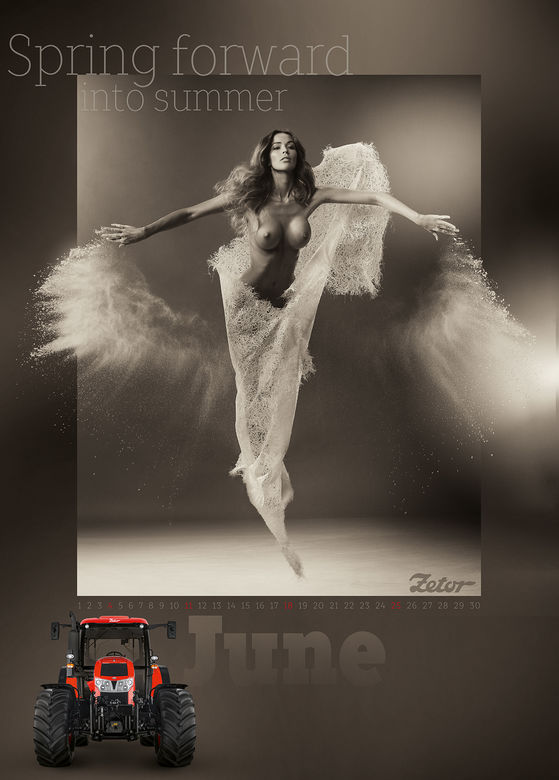 ZETOR calendar 2017 was designed and created in cooperation with a recognized photographer Martin Fridner who has been collaborating with ZETOR for the past two years. Martin Fridner is a famous Slovak photographer who works mainly in the sphere of advertising. Soon after graduating from Slovak Technical University in the field of Electrical Engineering he became a professional photographer. During his career, he created advertisements for renowned companies such as Coca-Cola, T-Mobile, Orange, Playboy, Adidas, SND, Corgoň, Allianz, Laziza and others.

What is the main theme of the Limited Edition of the 2017 calendar?

The conception of the Limited Edition of the 2017 calendar was inspired by nature. It is based in lyric composition of natural scenes or social activities which are typical of the respective month.

Could you briefly describe each page of the calendar? What does each page depict?

January is the month of snow and snowstorms. February is the dancing ball season. In March, nature starts to wake up from the winter sleep. The calendar depicts this month as a budding tree which is waking up to the new life in misty spring countryside. April is generally the month of unstable weather and May is symbolized with the nature in blossom. The notion of June is expressed through the image of the transformation of a caterpillar into a beautiful butterfly. July depicts the summer and holiday by water. August is devoted to harvesting crop. September illustrates gossamer. October is the time of animal heat; November is the climax of autumn with falling leaves. December brings the winter and white snow.

How long did the creation of the Limited Edition take?

The idea concept started to originate at the beginning of the year together will all practical preparations for the shooting such as production, model selection and so on. The shooting itself took four days. Each model in the calendar represents three months.

What were the biggest problems during the making of the calendar?

I cannot say we had any real troubles during the making of the calendar. The most difficult part, though, was the selection of models suitable for shooting the calendar.

What was, on the other hand, easier than you expect and what did you like to most?

This year were trying to avoid demanding montages which were created in the last edition of the ZETOR calendar. I really liked the feeling that we are making clear photo shoots with minimum postproduction. Last year’s edition was based on complicated photo-realistic montages, which was very time-demanding, mainly in postproduction. This year was more demanding in the preparations and the shooting itself. Everything you can see in the photos is reality during shooting. Nothing was added later.

The models were aware of the fact that they are taking part in a difficult project and they approached it with responsibility and professionality.

What do you personally thing of the new calendars?

New calendars mean a shift towards art photography; they involve the fantasy of the viewer. I think that in today’s fast-moving world it is just good for the project.

Where would you like to see the new calendars? How much successful do you think they could be?

I would definitely be happy if they were successful with our partners all around the world. I wish for even better sales than the previous edition had. I would of course appreciate a prize in creative competitions.

What were the clichés that you had to deal with during the making of the Limited Edition?

I had the freedom from the necessity to depict the product directly in the main photograph, which I understand as avoiding the usual cliché. And yet, in the layout of the whole page of the calendar, the products have a significant presentation.

Have you ever had a ride in a ZETOR tractor? What was the experience like? And if not, would you like to?

I have never had a ride in the tractor but I surely would like to. I would do anything to drive some of the models in difficult terrain. 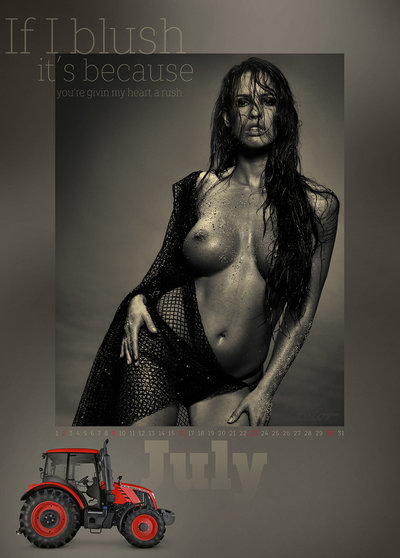 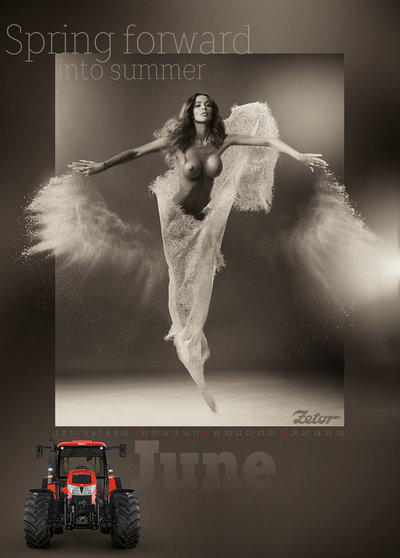 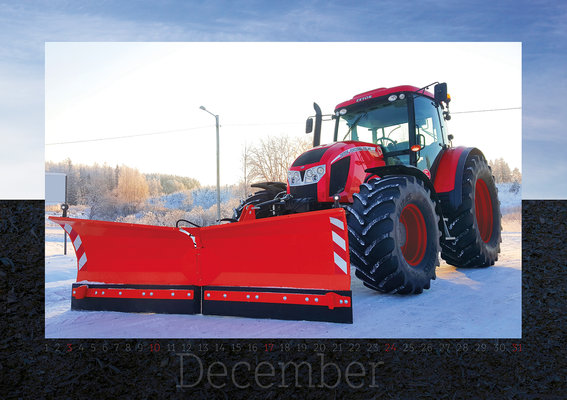 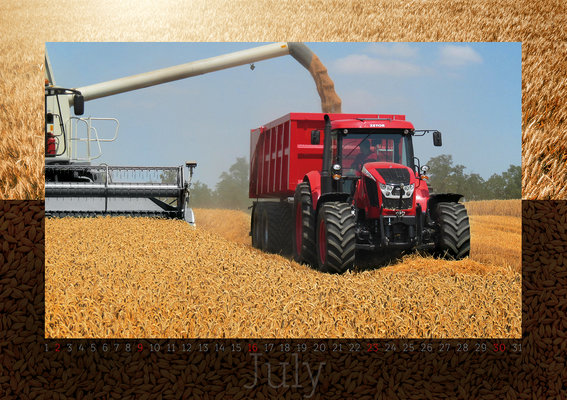