Each original spare part is marked with an indelible stamp and barcode that bears information as to when the part was stocked out, who packed the part and when it was manufactured.

Original spare parts are supplied in original packaging carrying the company's logo and labelled with the product number and barcode with a unique identification number. How did these non-original parts turn out?

ZETOR has carried out a detailed analysis of non-original ZETOR parts purchased from unauthorized dealers.

The plate does not have the approved type of lining (the approved ZETOR lining is from Reibestos). Using a non-approved lining on the plates results in a reduced life, slip at higher engine outputs and, last but not least, increased wear of the.clutch pressure plate. 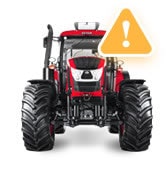 The non-original water pump and clutch plate cannot be used as spare parts for ZETOR tractors.

We compared original brake pads from KNOTT with cheaper non-original pads from TEXTAR.

To maintain the operating safety of the tractor, it is not recommended to use brake pads from TEXTAR or from other manufacturers of similar products!

In addition, using non-original brake pads have a significant effect on the life of the other parts of the brake system – for example the brake discs, brake callipers and sealing elements, which could be largely impaired by the high temperatures the brake pads reach.

Zetor found through testing that the connecting rod could not be used as a spare part for ZETOR UR I engines. There was a risk when using the non-standard part it could deform in the best case, right up to failing completely in the worst! The fitness of the entire engine could be put in question through the use of the non-original connecting rod.

The width of the vanes and their operating height was not consistent.

It was not possible to screw a bolt into one of the threads.

Sales and service network
Back to spare parts